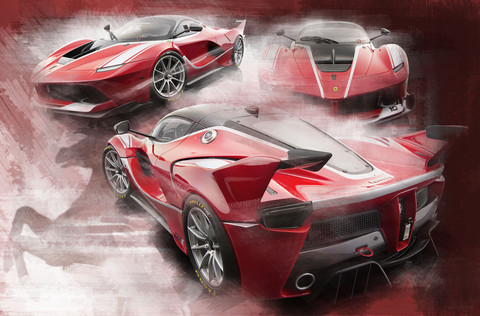 FXX K - the new Ferrari "monster" reproduced by BBR in every single detail in scale 1/43rd.

"Five seconds. That's the gap between the standard 950 bhp LaFerrari and the monster LaFerrari FXX K around Ferrari's private Fiorano test track. Proof, not that you needed it, that the FXX K is, well, fast.

At the FXX K's  official launch at the Ferrari World Finals in Abu Dhabi, the company confirmed that the track-only FXX K had lapped Fiorano in 1m14s (the LaFerrari does in in 1m19s).

There was also confirmation that the 1050bhp hybrid hypercar has all been accounted for. Less than 40 models will be produced at a cost of € 2.5 million each,and, according to Ferrari's Nicola Boari, it's all sold out."